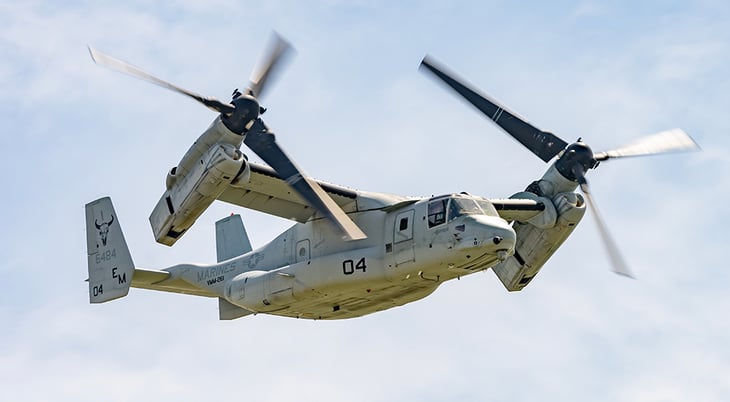 The U.S. Navy tapped Mahaffey as the winning vendor for an important recovery project about to begin. The project was part of continuing efforts to repair and replace structures damaged by Hurricane Florence two years ago on the East Coast.

The Navy needed a relocatable maintenance hangar for its elite Osprey helicopters – it planned to build a permanent hangar and what was left of the original structure would be demolished. This meant that the fleet needed a dedicated place for repairs and protection installed right away.

The Osprey is a combat aircraft hero. Its value as a multipurpose amphibious assault transport and service aircraft is unsurpassed. The U.S. Navy chose Mahaffey to design and install a shelter for their prized bird, based on Mahaffey's years of experience creating temporary solutions for government and military branches.

The greatest challenge faced by the client was a tight timeline. The new hangar would take at least a year to build, so the navy team wanted to get the demolition and construction underway as soon as possible. They asked Mahaffey's team to have a fully-functioning temporary hangar within a few weeks.

Mahaffey was tasked with designing a structure with enough space to house at least two Osprey helicopters. Other requirements for the structure included having a cargo door at each end of the hangar, an electric kit powered to raise the cargo doors, wall receptacles for power tools and multiple interior light bays. 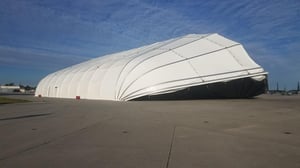 Mahaffey's team considered all of the requirements and specifications for the structure including regional codes. The team proposed the Mahaffey Tension Series™ (MTS™) clear span fabric structure as the ideal solution.

The MTS™ is engineered to be quickly installed for temporary or permanent projects. Engineered using the benchmark peaked-arch profile, the Mahaffey Tension Series™ has proven its versatility on projects ranging from sports facilities to permanent warehouses.

Additionally, Mahaffey proposed installing a complete electrical kit with an air compressor for the interior requirements of the structure.

Mahaffey's team went through the customary background checks and security clearances required by the military. Once the team arrived on the base, they were able to complete the installation of the clear span structure, the two Xtension™ doors and the unique addition of a Mahaffey installed electrical kit in under a month – 28 days to be exact!

Mahaffey's quick turnaround allowed the construction team to begin their work on the permanent maintenance hangar on time. 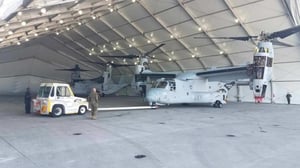 The Navy team expressed satisfaction with Mahaffey’s swift action to shelter the Osprey fleet. The temporary hangar allowed them to reach their milestone and begin the permanent hangar project early this year. They also asked Mahaffey for a lease extension option, to keep the maintenance hangar on-site longer, if necessary, to accommodate any potential delays with construction.

Even though Mahaffey has a long history of designing and delivering turnkey aviation solutions, housing such an important aircraft was a thrill and an honor for the team.

If you have a large project coming up, trust a vendor partner with a proven track record of consistently coming through for our military. Choose Mahaffey.

Call one of our project managers today.