Mahaffey Rushes in to Help Salvage the Aftermath of Hurricane Florence 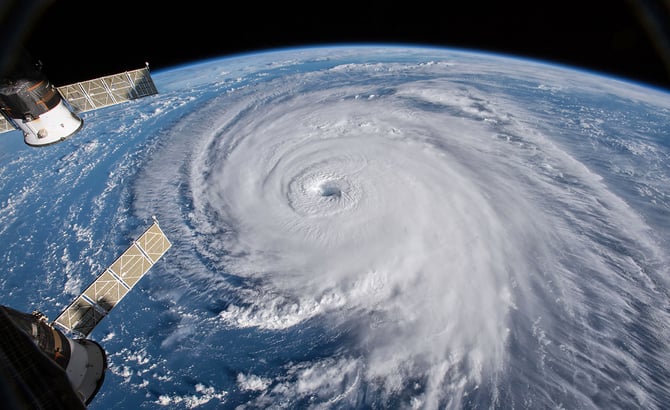 In 2018, Hurricane Florence left more than $24 billion worth of damage to homes, businesses, cities and towns. Some areas received more than three feet of water, and more than 2,600 commercial buildings were submerged by at least a foot of water. The category one hurricane made landfall with over 90 mph roaring winds. Thousands of businesses suffered at her brutality. A large lumberyard was one of her victims. Their building was damaged, and the company needed a new facility immediately to protect its lumber. With their rapid response and prepared available inventory, a Mahaffey temporary fabric structure was a perfect remedy.

A lumberyard located in Hurricane Florence’s path was badly damaged by the storm. The company needed to immediately relocate all of its lumber to a new facility. Destruction was widespread, and it was difficult to access the location of the lumberyard. There were reports of houses, boats and trees blocking the main roads. The team was faced with dangerous and difficult maneuvers in directing the delivery truck through the small side streets. Project Manager, Ethan Mathias said that overcoming obstacles in arriving on the site was the biggest challenge and took the most work.

The client’s needs included a structure that could:

Mahaffey monitors the weather and prepares for natural disasters by maintaining inventory and building frames ahead of the storm. The crews also ready themselves for immediate dispatch. This is Mahaffey’s rapid response. Mahaffey was originally contacted on October 18th, and the crews arrived to begin installation on November 5th. With the surrounding damage and both local residents as well as relief workers occupying the hotels, the installation crew was forced to drive 70 miles each day from their hotel to the jobsite. Their commitment in offering a quick turnaround and an immediate solution for the client remained the installers’ top priority. The lumberyard rented a parking lot a few miles away from their original location to house the temporary structure. Due to the size of the structure, it was installed on the asphalt parking lot but also covered the gravel and dirt surrounding area. Mahaffey installed a 50 foot x 296 foot Lowsberger 300 temporary clear span structure. They added two 16 foot manual magnetic cargo doors to allow for fork lifts to operate in moving the lumber.

Because of Mahaffey’s diligence and preparedness, they were able to immediately deploy and offer assistance. The temporary clear span structure was designed, transported and installed in a little over two weeks. As one of the first to arrive on the scene after the storm, the crew had to navigate their own path as the main roads were all blocked with debris. The Mahaffey team persisted and successfully provided the lumberyard a new facility. The lumberyard was able to protect their inventory and avoid further destruction and loss.

With a large inventory and foresight in planning for natural disasters, Mahaffey is able to offer a rapid response to their customers. Mahaffey’s installation team immediately deployed to the devastated area. Mahaffey remains dedicated to offering customers the most cost-efficient and timely solution for their project or need. The team of forward thinkers prepares for the worst, thus offering their customers quick turnarounds and readily available solutions. Call Mahaffey today. They are ready and waiting to help.