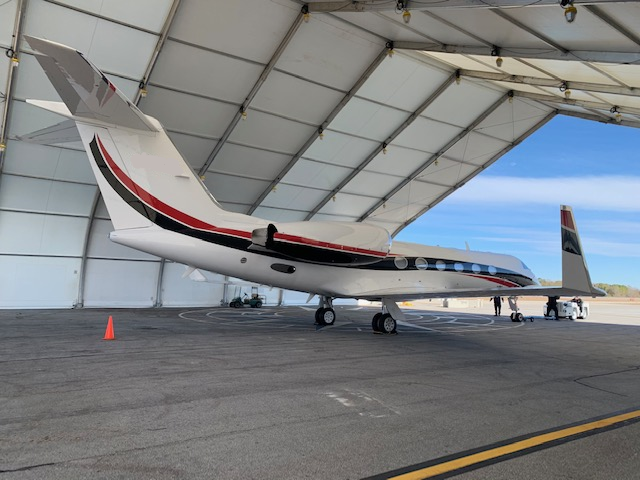 Quick turnarounds and airplane hangars are two of the many areas of expertise in Mahaffey’s wheelhouse. That's why an international aircraft maintenance service called on them to help get a grounded plane back in the air FAST.

The privately-owned plane routinely transported its owner, a respected millionaire entrepreneur, around the country. But on a recent flight, the pilot reported landing gear issues and requested immediate clearance to land at a small regional airport. The landing proved uneventful, but the plane was grounded until the landing gear issue could be investigated and repaired.

The team conducted research and identified Mahaffey's expertise in the installation of airplane hangars for clients such as the U.S. Air Force, Coastguard, and the president's Marine One helicopter fleet.

The AOG team faced a strict deadline. They were feeling pressure from the owner who wanted his plane returned to its home base airport and the regional airport that wanted the aircraft’s space on its tarmac vacated as soon as possible. These circumstances led the AOG team to request the completion of the installation within 10 days after the start date.

The AOG team requested a large enclosed hangar. The dimensions of the plane required a space that was about one-third of an acre in size. The hangar needed to close out the elements, especially wind, while the aircraft was being repaired. The space had to allow enough height and width for the mechanics to lift the plane on the jack to replace its landing gear.

Additionally, Mahaffey's project manager learned that the airport would not allow the team to stake into the tarmac, so they had to devise a way to stabilize the structure.

Mahaffey's expert team considered the client specifications carefully. They chose the MTS™ as the ideal solution for the temporary maintenance hangar, based on the dimensions of the plane and the request for a durable, fabric structure capable of keeping the wind from getting under the plane. They chose concrete ballasts as their anchoring platform, to avoid drilling stakes into the tarmac.

The MTS™ structure is engineered to be quickly installed for temporary or permanent projects. Engineered using the standard peaked-arch profile, the Mahaffey Tension Series (MTS™) has proven its versatility on projects ranging from sports facilities to permanent warehouses.

Expediting delivery of 120 concrete ballasts to the jobsite required Mahaffey's project manager to do some logistical planning–he needed to find a local vendor with sufficient trucks to transport the ballasts to meet the strict deadline. Once the vendor was secured the installation team deployed.

The crew arrived on-site at the appointed time and began assembly of the frame for the structure. Despite advance planning and crew clearance, the project was unexpectedly delayed by the Federal Aviation Authority (FAA) demanding a specific permit. The crew had been granted airport clearance to install the structure, but the airport’s management overlooked a necessary FAA permit. The Mahaffey team was required to stop working until the permit could be obtained. Fortunately, they were able to expedite the permit from the usual six-week process to only one week.

The Mahaffey team was able to resume work. In a few days, the plane rolled into the hangar as planned. Mahaffey's installation team then enclosed the gables and began the finishing touches to complete the installation. The AOG mechanics were so anxious to start repairs that they started working on the plane as Mahaffey finished the install.

Two days after the hangar was complete, the plane was ready to fly. Mahaffey's solution enabled the AOG team to complete their mission in just a few days and deliver on their promise to the plane's owner to return his aircraft safe and sound to its home base.

When a plane is grounded, it's a logistical problem for the airport team and the AOG team responsible for the maintenance and repairs necessary to get the plane back in service. That’s when you need a partner who offers flexible, customizable solutions and brings aviation industry and logistical expertise to the table.

If you have a time-sensitive project, choose a vendor partner with a proven track record in providing quick turnaround solutions. Choose Mahaffey.

Call one of our project managers today.