Mahaffey Project Manager Mark Huels recalls the role he played in building and maintaining disaster relief base camps in Mississippi.

I started working with Mahaffey in 1985 on the installation team. By 2005, I had years of experience in installation and managing special events. That’s why I was called a couple of days before Katrina hit the coast and given the opportunity to join the Mahaffey team building and supporting base camps in Kiln, Biloxi, and Gulfport, Mississippi.

One of our relief agency clients chose Kiln, Mississippi as the location to set up disaster relief shelter to house crews coming in as a part of the Gulf Coast relief effort. This included first responders, power company crews, and tree removal and road crews. They came from Mississippi and the surrounding states of Alabama, Kentucky and Georgia.

I received a call from the leadership team that we needed to respond fast and that we needed someone to take the lead ahead of the crew’s departure to get things set up in Mississippi. I was selected to be the first responder for the Mahaffey team and immediately began plans to mobilize.

Shortly after the call and as I began plans to mobilize, my parents arrived at my home in Memphis, Tennessee. They had evacuated their house in Diamondhead, Mississippi, just ahead of the hurricane. Their home was located not far from Kiln. The coincidence didn’t escape me that I was headed into the same storm my parents narrowly escaped a day earlier.

The same night my parents arrived, I packed up my clothing and a cell phone and prepared to drive down to Kiln pulling a Mahaffey disaster relief camper.

I spent the night of August 29 in a Wal-Mart parking lot in Hattiesburg, Mississippi inside that little camper waiting until it was safe to travel further south to the base camp in Kiln. It really didn’t occur to me that this project would be one of the most urgent assignments of my career in the temporary structure business.

I can only describe what we did in Kiln, Mississippi as building a city out of tents and structures. There was nothing but an open field with a barn when we arrived. We raised about seven large-scale pole tents to serve as sleeping quarters. The structures were fully floored and eventually fitted with cots lined up in neat rows. We built one dining hall, which measured approximately 60 feet wide and 100 feet long. FEMA and the Coast Electric Power Association at Kiln provided a catering food truck and general supplies needed for crews arriving soon.

Kiln served as base camp for the first responders who came to help with the massive clean up efforts to restore power grids, clear roadways and restore water service. Hundreds of crew members left early every morning with bagged lunches provided and returned for dinner in our dining tent and, of course, to sleep after the day’s hard work.

As the cleanup timeline progressed, donations began coming in from church groups and food product manufacturers. One donation stands out in my mind as among the most memorable: Anheuser Busch Company donated hundreds of cases of beer cans filled with water.

Of course, it wasn’t luxurious. Amenities didn’t exist. For the first few weeks when the Mahaffey crews were setting up the base camp, if we wanted to shower, we used a garden hose in the barn. We installed a small 10x10 tent to offer some privacy. We had no electricity for the first day or two. Of course, nobody had electricity! But we had the essentials until the generators arrived to bring power to the camp.

After the base camp was up, the rest of my job was to work maintenance at Kiln as well as the base camps in Gulfport and Biloxi. If one of our tents had a problem, my job was to travel to fix it and make sure our customers were 100% satisfied. This travel allowed me to start seeing more of the damage Katrina left behind. 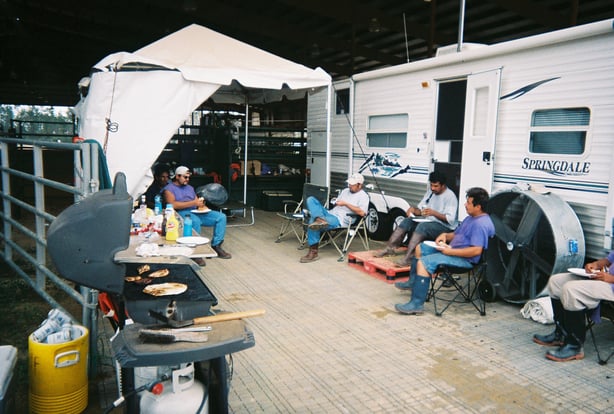 Gulfport and Biloxi, Mini Base Camps for First Responders

Early on when I began driving between sites and witnessing the aftermath, there were still bodies to be found. It opened my eyes to the despair and how important Mahaffey’s role was to the people affected.

For those who didn’t witness it first-hand, it's hard to imagine the devastation. People didn’t have homes, electricity, phones, or cars. And, there was no place to buy gas even if you had a car. So if your car ran out of gas, you were stranded. I remember one gas station powered up their pumps with a large generator, and the cars and trucks lined up stretching out ten miles.

Banks were closed, and, of course, the teller machines required electricity, so no money could be withdrawn and credit cards didn’t work.

In grocery and convenience stores, all refrigerated foods spoiled. The only food available to buy for cash only was dry goods.

Despite all the obstacles, the Mahaffey team was able to meet the demands of our customers and provide immediate response.

Mahaffey set up the Red Cross medical tent in Gulfport. It was a large frame tent where people came to receive medical attention, get prescriptions, or have a bagged, ready-to-eat meal. Many people visited because they needed daily medication they didn’t have access to anymore.

It’s hard to imagine, but even the Wal-Mart was closed.

Church groups and charitable organization workers unloaded boxes of donated clothes and spread them out in the parking lot of a mall near the Red Cross tent in stacks. People went through heaps of clothes in droves. Some people didn’t have a change of clothes, and in some cases, there were people who didn’t have any clothes at all. 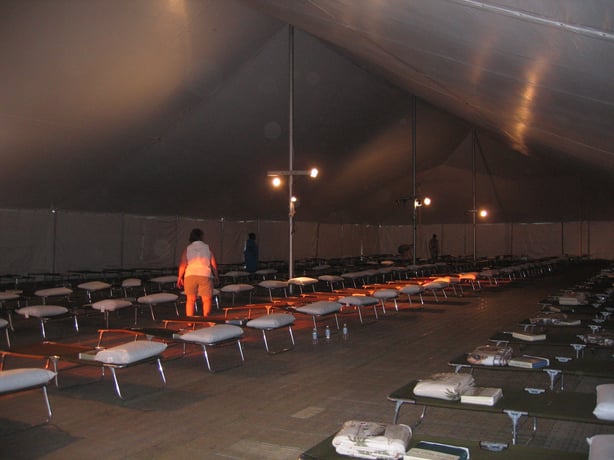 Some of the people who stayed in their homes during Katrina had braved hurricanes in the past. They expected life to return to normal soon after the storm passed. But after a few days, they started to realize this one was different. And that’s when we started to see more people coming out to find the camp and FEMA trailers to get help.

We take for granted having a place to go home to. A home is one of the most important things we have. Faith is another. Believing that things will get better and that there’s hope is important when you are involved in a devastating situation like Katrina. I felt grateful to be there, and I felt my faith enabled me to be part of bringing hope to all those people.

I did experience moments of levity during these road trips. One day I saw a pool table, ready for a game, sitting in the top of a tree. It must have been six feet or more in the air. The water must have reached that level inside the house, carried the pool table out of a window and docked it in the top of the tree. The water receded in a few days, but the table stayed put.

I saw cars and boats flung over the landscape in every configuration and clothing draped in trees. When the water returned to the gulf, streets and beaches were gone. Casinos and hotels were gone, and for eight or ten blocks inland, there was nothing but debris.

One day on my drive over to make repairs, I was forced to reroute because a casino barge had washed inland and crashed into a house. It totally blocked the road. It was surreal—as if the Titanic was dropped at one end of the neighborhood, and then a tornado from the Wizard of Oz dropped a few houses from the neighborhood a few blocks over at the other end. I've never seen anything like it.

Kiln remained my home base, and when I traveled to Gulfport or Biloxi, I’d take six or seven bagged lunches in case I ran into anyone along the way who might need something to eat. And sometimes it happened.

Even though the various contractor crews may have felt that the Kiln, Mississippi base camp was primitive at first—with few amenities—we were fortunate. I was proud of the guys I worked with, too. Guys from Mahaffey came down and slept on the floor sometimes, just to lend a hand.

All these years later, Katrina is still a difficult time to remember, but I’m proud of the few months I spent there and the work Mahaffey did to make a life-altering storm bearable for the many crews of workers who were there to help the Gulf Coast through the beginning stages of rebuilding.

Interested in learning more about emergency response prepardness and disaster relief shelters or want more information about the services we offer?